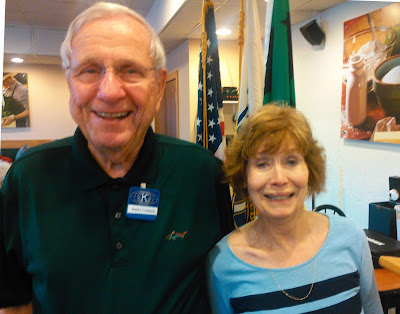 Jerry Carrier and Marcia Irwin are two of our newest members.  They met after their first spouses passed away  and married in 2011.  Marcia is from Wabash.  She describes herself as a stay at home mom who did PTA.  She then went to IUPFW,  She was a business manager for an orthodontist.  She moved to Carmel to be closer to her 2 grown children.

Jerry grew up in Cincinnati and graduated from Hughes High School.  He attended two years at Miami University of Ohio before entering the U. S. Army.  In the army he served in Germany in the Quartermasters and Provost Marshall.   He returned to Miami, graduated and entered the Insurance business.   For over 50 years he was an agent in Lawrenceburg Indiana.   Jerry is a Past President of the Lawrenceburg Kiwanis.  He has 4 children and 8 grandchildren.

After meeting they moved to their home in Greenfield and recently joined our club.  Welcome.


Posted by Greenfield Kiwanis at 4:56 PM No comments:

The report included the road and infrastructure funding, the end of ISTEP and the future of educational testing, public health issues including heroin and meth.


Posted by Greenfield Kiwanis at 4:40 PM No comments:

Hi Friends,Just wanted to bring everyone up to speed about the carnival at J. B. Stephen's Elementary next Friday, April 22, 2016.  My memory was way off on the time I told you last week.  The carnival runs from 6-9pm.  So sorry for the mix-up.  Hope it doesn't inconvenience any of you.I hope to get as much of the food donated as possible but I have hit a major snag in that plan.  Robert Flanagan, Kroger manager and very generous donor to the club, has been transferred to the New Castle store.  I'm meeting with the co-manager at Kroger on Sunday to ask for his help.  If necessary, I will also go to Marsh & Wal-Mart.Thanks to all of you who signed up to help work that evening.  I will have a sheet for everyone at Tuesday's meeting with the various jobs.  I think we need to be at the school to start prepping at 4pm. The hot dogs will already be cooked when I bring them.  At the school, we'll put them in the buns and wrap them in aluminum hot dog wrappers to store and serve from roasters.  I need to borrow 4 roasters.  Also, I think I will need at least 4 large coolers for drinks. Please let me know if you can lend either of these to us for that night.For you cookie makers, I need 200 bags of 2 cookies in a bag.  I would like for them to be about 3" in diameter.  I need 100 bags of 1 2" x 3" brownie in a bag.  Lastly, 100 cupcakes need to be baked.  KBMSK has an over-abundance of small Styrofoam plates we will use for the cupcakes and lots of napkins to donate.  As I mentioned before, you are more than welcome to bake at the soup kitchen if you like.I will tell you more about the food as soon as I know more.Thanks so much for volunteering your valuable time. I will do my best to make this event successful for us.Jill

Posted by Greenfield Kiwanis at 1:04 PM No comments:

Key Club will be holding a Cystic Fibrosis fundraiser at the Greenfield Dairy Queen, Wednesday, April 20, from 4 pm until closing, Please support our high school youth club and enjoy fresh soft serve at the same time.
Posted by Greenfield Kiwanis at 2:42 PM No comments:

Greenfield's teams will run again tommorow between 7:30 and 9 but most likely around 8:00. The teams are currently in 1st and 2nd place in the High School Division and 2nd and 5th overall.
To see live streaming click on this link:
www.ustream.tv/channel/NASA-msfc

Posted by Greenfield Kiwanis at 2:01 PM No comments:

Posted by Greenfield Kiwanis at 9:30 AM No comments:


Dave Medved shared pictures of his recent travel to Scotland and England.  The pictures were beautiful.
Posted by Greenfield Kiwanis at 9:24 AM No comments:

The Greenfield Moon Rover team will compete this weekend with our own Scott Kleine providing leadership and engineering talent. The events take place this Friday through Sunday in Huntsville, Alabama.. Greenfield's teams are team # 14 and 15 and will run before noon on Friday.   We will post the Saturday times late on Friday or early Saturday morning.

To see live streaming click on this link:
www.ustream.tv/channel/NASA-msfc

Posted by Greenfield Kiwanis at 12:13 PM No comments: