Susie Broome and Susie Billings (the Susies) worked with Maura Hutchinson at St. Michael's in the cafeteria when she was the manager of the school cafeteria.  They invited her to tell Kiwanis about her Irish heritage.

Maura's father and mother came to New York in the United States where Maura was born, a dual citizen of both countries.  The returned to Ireland after some time where Maura finished her education.  She became a Social worker and then moved to Indianapolis, and  eventually to Greenfield.  Maura talked about her experiences and life in  Ireland and the tours she conducts back to Ireland in conjunction with CIE Tours.

Posted by Greenfield Kiwanis at 5:47 PM No comments: 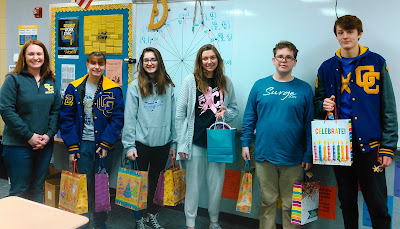 The Greenfield-Central Key Club assembled birthday bags at their meeting to donate to the Hancock County Food Pantry.  Michelle Marler and her students are shown with their birthday bags.  A birthday bag contains cake mix, icing, candles and plates for making children's birthday cakes.  The Hancock County Food Pantry distributes the bags to families who have registered their children aged 12 and younger so that all children can have a birthday cake.
Posted by Greenfield Kiwanis at 5:20 PM No comments: