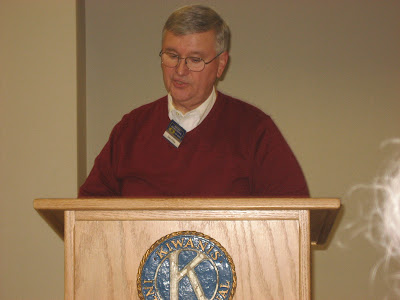 Dan Riley, former president of Kiwanis, paid tribute to Nancy King at a recent meeting.  was a former president, secretary and board member of Kiwanis who died in 2010.  Nancy, a very active and long time member, is greatly missed by the club.
Posted by Greenfield Kiwanis at 5:40 AM No comments: 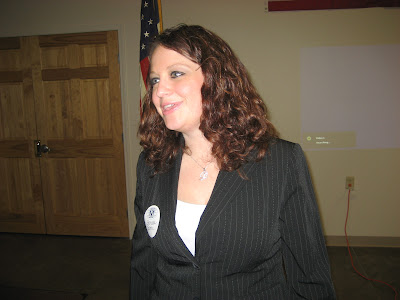 Brandee Bastin spoke to Kiwanis about her work with Indiana’s Tobacco Prevention Program. Working for a tobacco free Indiana has been a priority for ten years. The mission is to create a healthier community through the prevention and cessation of tobacco use in Hancock County.


In the past ten years, smoking rates for high school youth have dropped by 42 percent. Adult smoking rates have decreased from 27 percent to 23 percent. This means there are 207,000 fewer smokers in Indiana. Over the past decade decreased tobacco use has saved $3.1 billion in future health care costs, including $512 million in Medicaid claims. Indiana’s prevention program manages without tax dollars. These services are funded by the Master Settlement Agreement between Indiana and the tobacco industry.

Over 70% of Indiana’s schools have a tobacco free campus. Bastin says that while much has been accomplished, there is still work to be done. Indiana has a 21% smoking rate which sounds good until compared with 17% nationwide which puts us in the top ten tobacco using states.

One of Bastin’s favorite facts used to emphasis the harm of tobacco use is that “Tobacco is the only legal product that kills one third of its users if used as directed”.

For more information about ways to quit smoking, call 1-800-QUIT-NOW or visit; http://www.indianaquitline.net/.
Posted by Greenfield Kiwanis at 5:16 AM No comments: 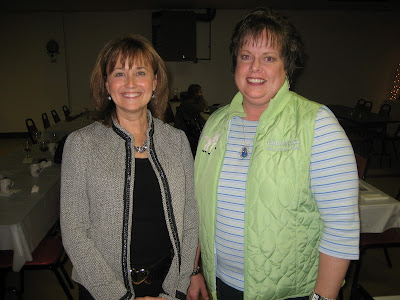 Marty Foster (left) and Elisa Bell spoke to Kiwanis last week.  Foster, a new member, spoke as a "Meet Your Kiwanian."  Bell invited Kiwanians to the Denim & Diamonds Dinner Saturday, Feb. 5, at the Indiana Downs Casino.  Proceeds go to support Edelweiss Equine-Assisted Therapy Center.  For more information about time and cost, send an e-mail to info@edelweisscenter.org.
Posted by Greenfield Kiwanis at 5:08 AM No comments: 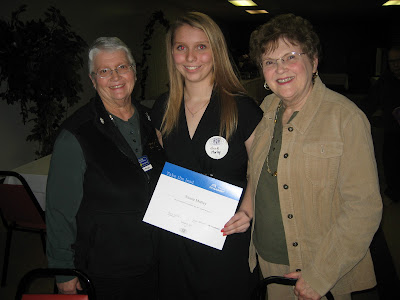 Terry Beagle, Nicole Morley and Pat Parker converse at a Kiwanis meeting. Beagle was Nicole’s advisor when she was in the Builders Club in middle school and Parker is her present Key Club advisor.


Nicole Morley, President of the Key Club at Greenfield Central High School, spoke to Kiwanis about her experience at Kiwanis Service Leadership Conference. Approximately 100 students attended the conference held at Rancho Framasa in Nashville, Indiana. Greenfield Kiwanis sponsored Nicole at the conference. Nicole thanked Kiwanians for the opportunity for the experience that she thoroughly enjoyed. The program was created by Kiwanis International and is conducted by adult and student facilitators. While at the conference, Morley met many new friends and learned that a Key Leader is an active listener, is empathetic, committed to the community, aware of self and others, helps people grow, is persuasive, is compassionate, builds community, is caring and turns goals and plans into action.
Posted by Greenfield Kiwanis at 10:04 AM No comments: 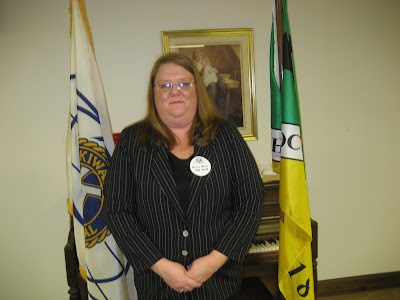 Kelley Mires from the Hancock County Hope House spoke to Kiwanis. She told that the Hope House serves people from Hancock, Rush and Shelby counties. There is a 35 bed capacity limit. Even though Hope House is considered to be the “Ritz” of homeless shelters, they still have rules and regulations that patrons must follow. If you are staying at the Hope House, there are educational programs provided to help with banking, parenting and job searching. A 7:00 a.m. wake up time is observed with clean up help required and then out to begin a job or job search from 9:00 to 5:00. Curfew is observed with lights out by 11:00 p.m. and earlier for children staying in the Home. Hope House is funded by donations and grants. They also work with county teens on a youth board called YEAH which stands for Youth Educating and Advocating for Homeless.


Hope House sponsors youth services, programs and a thrift store. Individuals or families may stay as long as needed providing rules are followed and an effort is made to learn and become independent.
Posted by Greenfield Kiwanis at 9:56 AM No comments: