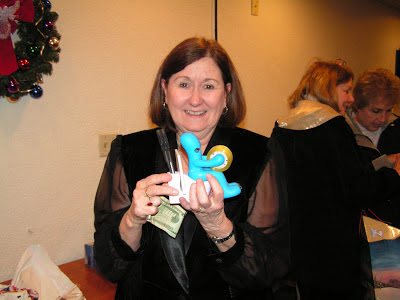 Vicki Emmons, Proud Owner and successful bidder
Greenfield Kiwanis held their 30 second auction to benefit the Kiwanis Scholarship Fund at their Christmas party on Decemeber 18.  Members bid on wrapped presents that have clues as to their contents.  Presents ranged from a rubber chicken to retauarant gift cards.
The auction raised over $1,000 for the scholarhsip fund.
Posted by Greenfield Kiwanis at 10:37 AM No comments: 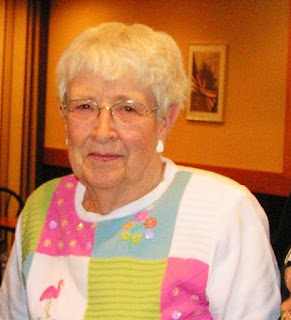 Dorothy Gunn received The Bert Curry Healthy Community Award awarded by the Hancock Regional Hospital Foundation at a dinner on Friday, Decemeber 14.
The following is her letter of nomination:
If  God puts angels upon this earth, Dorothy Gunn is surely one of them.  This quote from Dawn Earlywine summarizes very well the feelings of  the legions of people who have known and/or been cared for by Dorothy in her sixty years in Hancock County, over fifty of which have included being a nurse or volunteer at Hancock Regional Hospital.
Dorothy grew up on a small farm near Roachdale , Indiana where she acquired her tremendous work ethic by helping on the farm, starting with milking cows at age seven.  After graduating from High School , she entered the school of nursing at St. Vincent Hospital in Indianapolis .  Completing her nurse’s training in 1951, she married a young man she had met at the Indiana State Fair during her high school years.  That young man was Jim Gunn from Hancock County and he did all of us a tremendous favor by bringing Dorothy to our community.
Dorothy and Jim had four children, three boys and one girl, so Dorothy didn’t work in nursing for ten years.  She was contacted by the head nurse at our hospital in 1961 and asked to come to work which she did.  After five years of general nursing, she moved to the surgery recovery area where she would remain until her retirement in 2005.  She was supervisor of the recovery area nurses for many years and helped redesign the physical recovery area to what it is today.  Even as a supervisor she insisted on being a working nurse and many of us have awakened from surgery to see Dorothy’s smiling face and reassuring words. We knew we were in good hands.  Dorothy is one of the most compassionate individuals any of us will ever meet.  During her working years she was selected as the outstanding nurse of the year by the physicians, won the Vocational Service Award from the Greenfield Rotary Club in 2001and honorable mention(third place) in the Indianapolis Star’s Salute to Nurses in 2003.  Upon her retirement, the hospital established an annual award in Dorothy’s name for excellence in nursing.
Shirley Torok who worked in Recovery with Dorothy for fifteen years had the following comments.  Dorothy led by example and had the total trust of physicians, patients and co-workers. The patients received excellent care. The atmosphere in which the recovery room team worked with Dorothy as leader made that an idyllic time. They affectionately called her “Mother Gunn”.   Patients planning to have elective surgery were known to postpone surgery until Dorothy returned from vacation.  Some children waking from surgery would find Dorothy saying, “come to Grandma” and they felt secure in her arms.  Dorothy’s co-workers witnessed  her remarkable compassion because Dorothy demonstrated it in and out of the hospital.  A nurse’s aide developed a serious illness and couldn’t work anymore.  Dorothy visited her regularly and took food and financial support until her death.
Sandy McClarnon was a patient who was so impressed with “the kind voice, gentle face and loving care” as Dorothy cared for her that she sent Dorothy a thank you card.  Many years later, Sandy took her mother to the hospital for tests and was met by Dorothy with a smile and a wheelchair.  Sandy wasn’t at all surprised to learn Dorothy was now a volunteer.  Sandy felt that was “soooo Dorothy”.  Sandy ’s conclusion is that ”This world is a better place because Dorothy Gunn is in it”.
Dorothy’s hospital volunteer activities extend far beyond the Information Desk.  She has been:
A member of the Guild since 2006
A Women Helping Women committee member for eight years
Foundation Golf Outing for three years
Foundation Motorcycle Run for Breast Cancer for three years.
She has accumulated over 2500 hours of volunteer time in the relatively short period of her retirement.
She is also active outside the hospital.  She has been a Relay for Life committee member for 4 years, nursery teacher for her church for twenty years, camp nurse for Brownie scouts, worked with Toys for Tots, supported the Upward Basketball program in her church and is a member of Friends of the Library.  Dorothy is a valued and active member of the Kiwanis Club of Greenfield and delivers Meals on Wheels to local residents.  She has been a member and officer of the Shorthorn Cattle Ladies Association.  She and husband Jim are highly revered icons at the Hancock County 4-H Fair.
Dorothy Gunn spent forty three and one half years working as a nurse and nursing supervisor at Hancock Regional Hospital .  It has been estimated that Dorothy cared for approximately 2000 patients per year average.  Those 87,000 patients received superb care from Dorothy and her associates.  Her positive impact on her friends and cohorts and upon the good name of Hancock Regional Hospital is impossible to quantify but is tremendous.  There can be no question that Hancock County is a much healthier, kinder, more compassionate place to live because of Dorothy Gunn.  The Kiwanis Club of Greenfield is extremely proud to nominate Dorothy Gunn for  the Bert Curry Healthy Community Award.

Posted by Greenfield Kiwanis at 12:17 PM No comments:

Lester Hartley joined the U.S. Navy on September 6, 1940.  On November 11, 1940 he was assigned to the USS Jarvis, a destroyer.   They sailed from Seattle, Washington to San Diego, California and then west to Hawaii.  On December 6, 1941, the Jarvis was in port at Pearl Harbor for routine maintenance.  Lester Hartley received orders to be transported back to the mainland to enroll in Navy Diesel School.  He presented his orders to receive transportation but was told to return to his ship.  Lester told the Kiwanians, “I guess you know what happened the next day.”


From the machine room on the Jarvis, Lester heard planes buzzing nearby ships and saw them drop something.  He said they were always doing maneuvers and gave it no mind until he saw more planes and debris and smoke.  About that time general quarters was sounded and Lester reported to the Number 4 Gun where he shot at incoming enemy planes.  Lester stated that, “He did not see any ships hit by torpedoes or bombs because everyone had too much to do to stand around and watch.”
The Jarvis made its way out of the harbor and Lester was safe.  He did receive an injury when a watertight door shut on his wrist but no harm from combat.   In January, 1942 the Jarvis rescued 187 men from the torpedoed fleet oiler Neches.  Later that year Hartley received orders to report to Diesel School at Norfolk, Virginia.  He made it there this time.  The Jarvis was part of the Guadalcanal campaign and on August 8, 1942 was attacked and sunk in the Pacific.  None of the 233 men on the Jarvis survived.
Hartley continued in the Navy until his discharge on November 3, 1946 and later enlisted in the Naval Reserves where he served his country for another 18 years.  Hartley worked for Detroit Diesel Allison in Indianapolis and currently resides in Hancock County.  He was active in the National Pearl Harbor Survivors Association until that organization ceased existence on December 31, 2011.
Posted by Greenfield Kiwanis at 6:13 PM No comments: 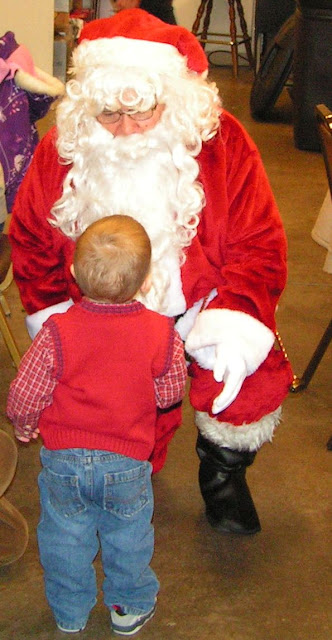 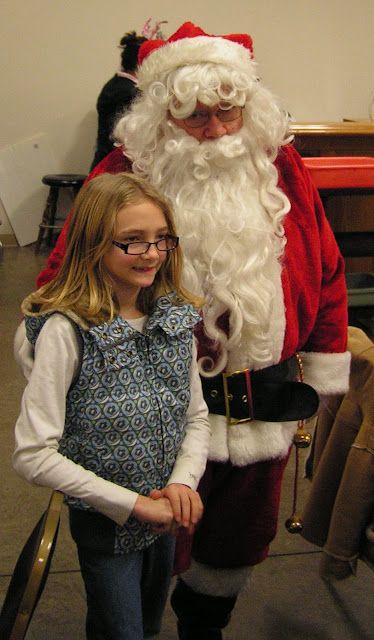 Santa Claus visited Greenfield on Saturday, December 8 at the Santa Claus Breakfast at the American Legion.  Santa's helpers are Kiwanis members under the leadership of Tom Billings.

Posted by Greenfield Kiwanis at 9:27 AM No comments: 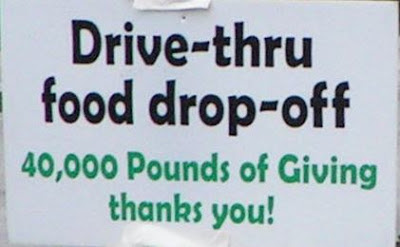 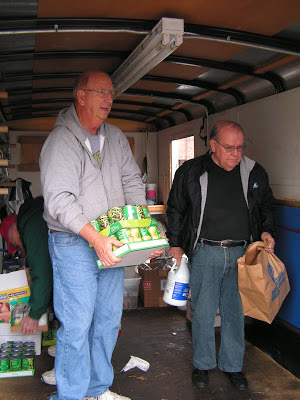 Kiwanis donated 2,477 pound of food to the 40,000 pounds of food drive held Saturday, December 8.  The food is distributed to the local food pantries, Hope House, and the Butler Soup Kitchen.  The food is in addition to weekly donations members of the club make to the Hancock County Food Pantry.

One of the clubs special projects is keeping birthday bags on hand at the food pantry.  Birthday bags consist of a box cake mix, a can of icing, napkins, paper plates, and candles.  The bags are distributed to families whose child will celebrate a birthday in the month they receive food at the pantry.

UPDATE:  The food drive met and exceeded it's goal for the first time by raising over 41,000 pounds of food!
Posted by Greenfield Kiwanis at 9:11 AM No comments: 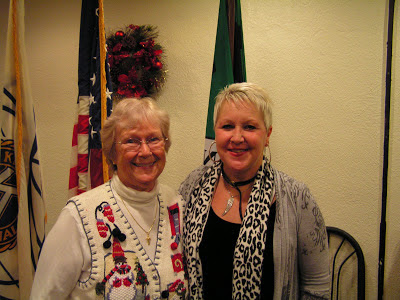 Lisa Muegge explained her mission in her businesses that she founded to help other,.  The restaurant tip jar proceeds are donated to local charitable causes.

Posted by Greenfield Kiwanis at 4:56 PM No comments: 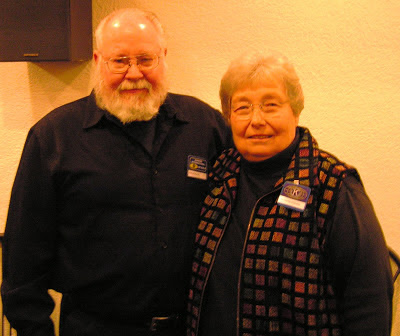 Jim an Yvonne Polise recently joined Kiwanis.  They spoke of their life adventures and explained how they found their way to Greenfield and Kiwanis.


Posted by Greenfield Kiwanis at 4:53 PM No comments: