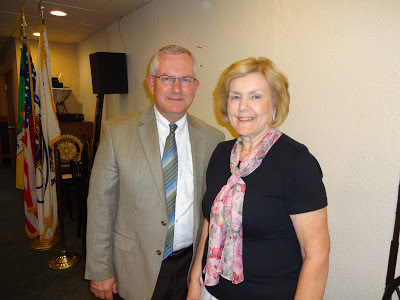 Joe Schultz from the Ronald McDonald House, spoke to Kiwanis about his position with the House.  He began as a once a week volunteer.  After volunteering for some time, the job of director opened and he was offered the position.  His wife still works as a volunteer.  His job consists mainly of fund raising.  He also visits with those staying at the House and tries to make sure their visit is as happy as possible.
The Ronald McDonald House was built 30 years ago and is where families of very ill children, who are being treated at Riley Hospital, stay.  There are 58 rooms. The sickest children in the nation are treated at Riley and their families can spend some rest or down time at the House. The cost is only $15 per night or free if the family cannot afford the $15.  The actual cost would be $75 so donations help defer family expenses.  By using volunteers the House saves half a million dollars a year.  Over 1400 families used the facility last year.  Two hundred and forty (240) were families from Hancock County.
Of interest was the fact that in 1971 a doctor at Riley, Dr. Morris Green, did away with visiting hours for parents of children at Riley.  It was shown that children seemed to get well sooner if parents were allowed to be with them more.  This started a trend with other hospitals and now most no longer have set hours for visitation.

Posted by Greenfield Kiwanis at 6:50 AM No comments: 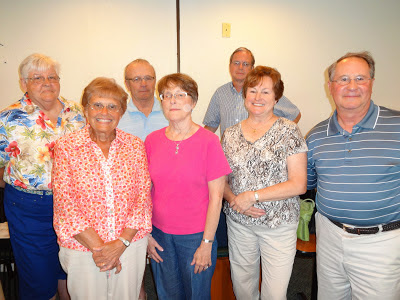 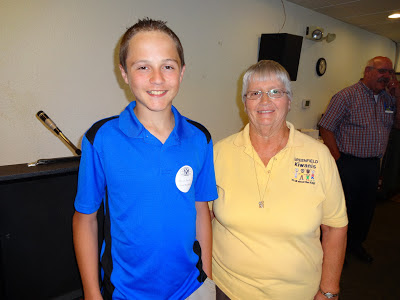 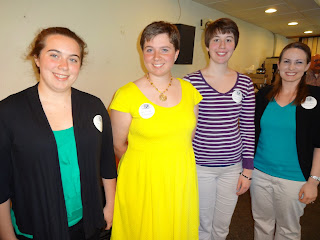 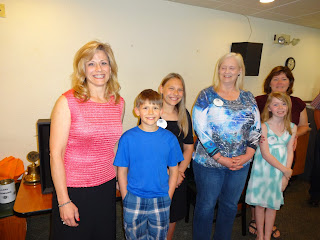 Connie Michael, Ethan Michael, Esther Michael, Sherry Clayton, Katie Grant and Michelle Grant.
At the recent Kiwanis meeting, visitors from the Richmond Chapter visited.  They reported on what was happening in their chapter.

Youth groups, sponsored by our club, reported on what they did in their clubs this past school year.  First to report were the K-Kids from . They told us that some of their activities included collecting food for the food Pantry, visiting some nursing homes in the area and collecting $600 in pennies for a philanthropic project.  Michelle Grant came as one of their school sponsors.

Trenton Roberts, next year’s Builders Club president, represented the Junior High School.  His club planted a tree to honor our , gave teacher of the month recognition and awarded teacher of the year.  They provided a new Club Bulletin Board for meeting notices, decorated a bus for the Christmas Parade in downtown , held a Valentines dance and participated in gathering food for the 40,000 pounds of food drive.

The Key Club from Greenfield-Central High School worked at the Garden of Eatin’, provided child care at Weston PTO meetings, worked at the Weston Carnival, walked in the CF Walk, provided Christmas gifts to a family, helped make and sell Kiwanis Easter carrots, and had a teacher appreciation week where fruit and candy were given.
Posted by Greenfield Kiwanis at 7:13 AM No comments: 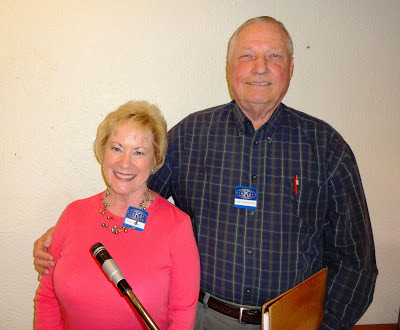 “Meet your Kiwanians” Burl and Georgia Carmichael were featured at the Kiwanis meeting May 28.  Both were born in and graduated from county schools (Georgia from high school and Burl from Hancock Central).  They met and dated in high school and married after college.  They have been married 46 years.  graduated from and Burl from Purdue.  After teaching Vocational Ag, Burl then worked for Elanco.  The Carmichaels have lived in different locations around the country ( and to mention two) but eventually returned to their roots.
Posted by Greenfield Kiwanis at 7:26 AM No comments: 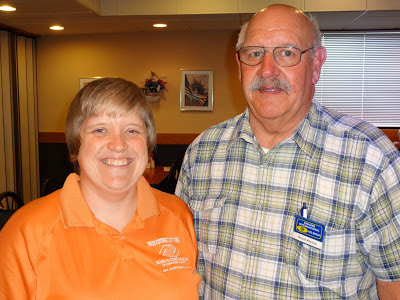 Kiwanis heard speaker Candace Sexton, Unit Director of the Hancock County Boys & Girls Club speak at their recent meeting.  Ms Candace, a very energetic and enthusiastic speaker, told us that their mission is “to provide a positive environment which seeks to inspire and enable all young people to realize their full potential as productive, responsible and caring citizens”.
During 2012, BGCHC served 6,256 youth through programming in its two locations, the Jim Andrews Unit () and the Eastern Hancock Extension (located in ).
The members were supported throughout the year by a total of 24 staff and 310 volunteers. BGCHC had 2 professional staff, 20 adult staff leaders, 2 youth staff leaders with 280 adult volunteers and 30 youth volunteers.  The organization is directed by a board of 12 volunteers.

Posted by Greenfield Kiwanis at 7:22 AM No comments: