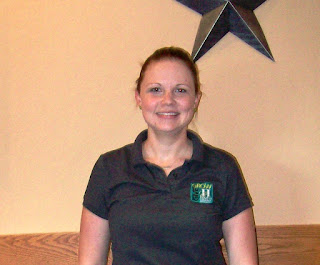 Amber Semersheim, Advancement Officer for Hancock County Community Foundation told Kiwanis about the over 270 funds totaling over $37.5 million that the Foundation stewards.  2017 was the 25th year of the Foundation's service to the County,

The foundation provides funding for more than scholarships to those entering college,   The Imagination Library program will provide an age appropriate book to all qualifying children who are residents of Hancock County. Books are delivered monthly to the home, and in the name, of the enrolled child…in other words, children will receive their very own book from the time their parents register them until the enter school.  The Foundation also has funds for Women's Resource Center, Love INC., and many other community organizations.

There are many funds and and ways to contribute to the Foundation.  For more information see givehcgrowhc.org.

Posted by Greenfield Kiwanis at 6:23 PM No comments:

Indiana State Senator Mike Crider spoke to Kiwanis about his roles in the Indiana State Senate and his background before seeking elected office.  Mike grew up in Shirley and attended Eastern Hancock schools.  He was accepted after school into the Conservation Officer program of the Indiana Department of Natural Resources. He retired from that position and became Security Director for Hancock Regional Hospital and then sought his current seat in the Indiana Senate.  He was elected in 2002 and has now served in six legislative sessions.
Mike spoke of his security experience at the Hospital as having been a good training for his legislative career, in that he experienced the beginning of the opiate crisis first hand in the emergency rooms of the hospital.
He chairs the Homeland Security and Transportation committees.  He is the ranking member of the Veteran Affairs committee.  He is a member of Mental Health, Appropriations, and Rules committees.  He was author of  Jenny's Law which changed the stature of limitations on rape.  He also introduced a bill that required 5,396 unprocessed sexual assault kits be processed and the results be checked against a felony DNA database.  The bill passed during 2018.
Senator Crider represents the 28th Senate District, he is married and has two sons. He lives in Hancock County and also represents parts of Marion and Shelby counties.
Posted by Greenfield Kiwanis at 5:13 PM No comments: 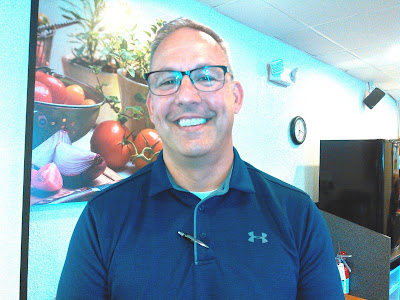 Dr. Shane Robbins, Superintendent of Mount Vernon School System, spoke to Kiwanis about the Federal Coordinating Center where his title is Lt. Col.  In 2017, Lt. Col Robbins was activated on 48 hours notice to staff a Federal Coordinating Center, near Fort Jackson, in Columbia South Carolina.
The activation was due to the problems associated with Hurricane Maria in Puerto Rico and the Virgin Islands.  Robbins has been in the Armed Services for over 30 years.


The Federal Coordination Center (FCC) Columbia team was responsible for receiving patients evacuated in the aftermath of Hurricane Maria on flights from either Puerto Rico or the U.S. Virgin Islands, evaluating the patients, and then setting them up with care at a local hospital. FCC Columbia, a team led by U.S. Army Reserve Soldiers, was the first Department of Defense team to be activated and receive patients in history. FCC Columbia was a joint operation between the Army Reserve, active Army and multiple civilian agencies.
The team performed this service coordinating with Department of Defense, Department of Homeland Security, Veterans Affairs, U.S. Public Health Service, and hospitals and human services agencies in the Columbia area.  They place 64 patients over a period of 28 days.
Dr. Robbins is leaving Mount Vernon Schools to be Superintendent of Kershaw County School Board in Camden, South Carolina.  Camden is about 35 miles from Fort Jackson and Columbia SC.  Dr. Robbbins quipped that his GO bag will now be smaller.
Posted by Greenfield Kiwanis at 4:55 PM No comments:

Donna Steele, President of the League of Women Voters of Hancock County presented information about the League to Kiwanis.  The mission statement of the League is "We envision a democracy where every person has the desire, the right, the knowledge and the confidence to participate. We believe in the power of women to create a more perfect democracy.  The League is proud to be nonpartisan, neither supporting nor opposing candidates or political parties at any level of government, but always working on vital issues of concern to members and the public."
The League has 300,000 members nationally who are members of 700 local leagues.  The Hancock County League  has 25 members who meet quarterly at different locations throughout the county.
Ms. Steele talked of different priorities for the League which included changing how redistricting maps are drawn, voting rights, and supervising elections in partnership with the United Nations.

Posted by Greenfield Kiwanis at 4:35 PM No comments: