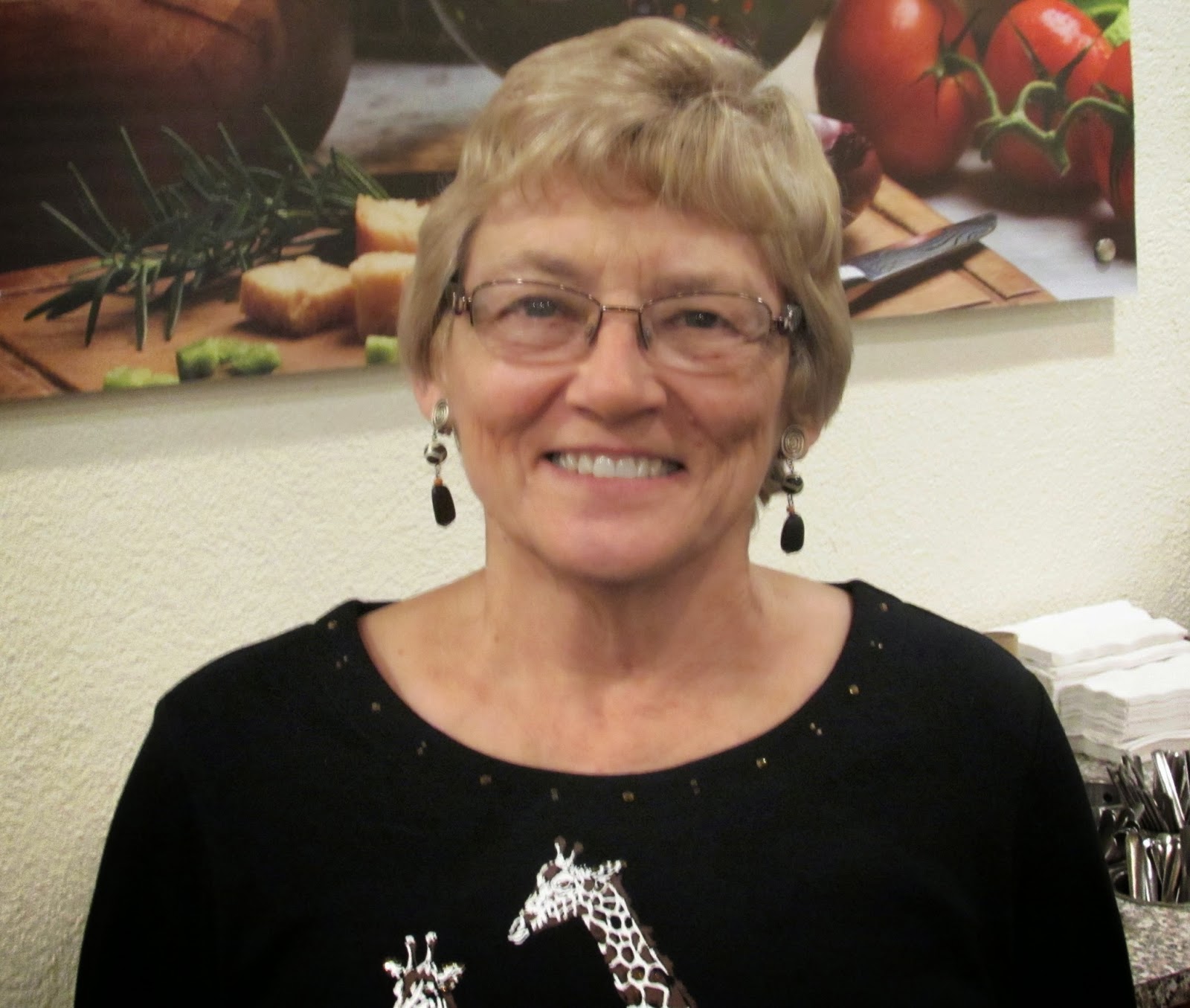 Barb Kauchak told Kiwanians about her life in the monthly Meet Your Kiwanian program.  Barb was born and lived in downtown Indianapolis, attended Tech High School, graduated from Normal College of the American Gymnastics Union (now IU School of Physical Education) and later from Indiana University with majors in PE, Health, and English.  She first taught at Northwest High School in Indianapolis where she met her husband.  Her career changed when she became the mother of a son and a daughter.  She taught gymnastics and baton twirling at the Memorial Building.  She was an office manager, obtained a Master’s Degree, and worked at IU Hospital in the Microbiology and Radiology departments.  She taught at G-CHS.  She taught at a Vincennes University campus in Indianapolis with her husband and daughter.  She retired with her husband to Brown County, Indiana where her career expanded to include managing a store in Nashville and being a bookkeeper at a church.
She returned to Greenfield from Brown County.  She continues to have a varied career in retirement playing the Dulcimer, working at the HRH Gift Shop, serving on the Nameless Creek Youth Camp and Springhurst Healthcare boards.  She is also a member of Tri-Kappa and Kiwanis.
Posted by Greenfield Kiwanis at 5:16 PM No comments:


Steve Long, President and CEO at Hancock Regional Hospital, gave the Kiwanis membership an overview of healthcare in the United States and the effect on our local hospital.
The first part of the presentation was a review of the past titled, “How we got here”.  One of the highlights was that it wasn’t until 1904 that standards for medical education were created and that Abraham Flexner’s 1910 report on Medical education spurred more standards for medical training, including hospital training.  The Hill Burton act was passed shortly after World War II and enabled many smaller communities to be able to build hospitals.  Hancock Memorial Hospital the predecessor of Hancock Regional Hospital was built using funds from the Hill Burton act.
Public health improvements in the past that lead to improved health were discussed that included toilets and sanitary sewer systems, clean water, better hygiene, immunizations, and better housing.
The future will concentrate on converting a healthcare system that is built to take care of the sick, to a system to keep the population well.  The main aim of government healthcare reform is improving access to insurance not healthcare.  Institutions need to concentrate on what is called the “Triple Aim”:
1.      Improve patient experience
2.      Decrease care expenditures
3.      Increase the population’s health
The emphasis on this future model of health care may entail many changes for Hancock Regional Hospital as it attempts to remain an independent organization that is the destination of choice by local residents for healthcare.
Long previously served as President and CEO of Skiff Medical Center in Newton, Iowa before assuming the leadership of Hancock Regional in 2014.  He and his wife Dorothy have four children.
Posted by Greenfield Kiwanis at 1:38 PM No comments:


Corporal Chuck McMichael of the Greenfield Police Department told Kiwanis about the Care Trak technology for children with Autism or Asperger’s and older people who have dementia or Alzheimer’s disease.  A transmitter is worn on the wrist or ankle and looks similar to a watch.  It continuously transmits a locator signal that police can track using a receiver tuned to a frequency specific to that person.  When a client is approved for the program their identification information and the frequency of their transmitter are recorded at the Police Department.  If the person is missing the police can use the receiver and an antenna to find the missing person in minutes.
Eligibility for the program is limited to those persons that have medical diagnosis of one of the disorders and history of trying to walk away from home.   Currently the Greenfield Police have 4 active clients.  The equipment they own could handle up to 8 clients total.  The initial startup costs for the system was $5,000.  The initial per client cost is about $300 plus $50 to $60 per year for maintenance including batteries.  All cost are covered by private donation.
The police train using the equipment on a regular basis and usually are able to locate the transmitter in 30 minutes or less.
Cpt. McMichael also responded to a question regarding Knock Boxes.  The boxes contain house keys which are accessible by public safety personnel to gain entry to a home in case of an emergency.
For more information about the Care Trak system call the Greenfield Police Department at 477-4410.  For information on the Knock Boxes call the GreefieldFire Department at 477-4430
Posted by Greenfield Kiwanis at 5:22 PM No comments:

Members of the Greenfield Kiwanis toured the Hancock County Food Pantry as part of their meeting.  Groups of Kiwanians registered as a family of four persons.  Each family then went through the pantry, choosing from the available food, the amount allotted for a family of four.  Each family is permitted to have the following:
1 gallon of milk
1 dozen eggs
4 pasta/rice/noodle selections
1 box of 1% milk
2 boxes, Skillet meals
3 cans of beans
3 cans of fruit
2 cans pasta sauce
1 jar peanut butter
1 jar jelly
5 cans condensed soup
1 bag of breakfast cereal
1 pancake mix
1 bottle syrup
1 box saltine crackers
4 miscellaneous items (canned peppers, cake mixes, tuna, cornbread mixes, etc.)
2 meat selections
2 laundry items
4 rolls toilet paper
Bread products usually great amounts available
2 jars Ragu cheese sauce and 1 six pack of Gatorade (from manufacturer’s donations to 40,000 pounds of food)
This is the entire amount allowed for a family of four from the food pantry for a month.  Additional items may be available as specials but this is the normal monthly allotment.


Posted by Greenfield Kiwanis at 5:45 PM No comments: