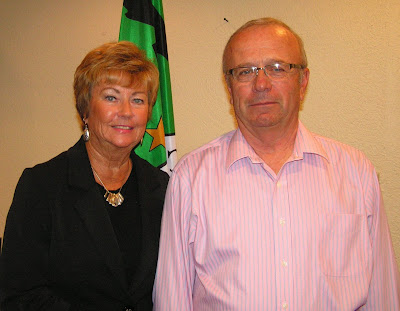 Meet Your Kiwanian featured Jim and Susan Cherry.  Jim and Susan are lifelong residents of Hancock County.  Jim is the fourth generation to live and farm here.  Susan is the fifth generation.  Jim graduated from Hancock Central High School and Susan graduated Charlottesville.  They met and began dating while in high school.
Jim and Susan have two sons.  The entire family farms about 3,000 acres.  A unique aspect of their farming is their joint venture with Elanco to farm land and donate the receipts from the 50 acres farmed to the Food Resource Bank.  All of the seed, chemicals and labor are donated for the 50 acres.  The Food Resource bank tries to increase crop productivity through education.  They are fighting hunger by collaboration with countries that need help and are teaching better methods and techniques for farming.
Jim and Susan have been married for forty-eight years and attend the Willow Branch United Methodist Church.
Posted by Greenfield Kiwanis at 6:11 PM No comments: 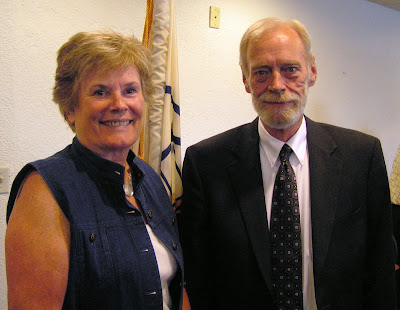 
Greenfield Mayor Dick Pasco spoke to the Kiwanis about the current state of the city.  The mayor’s grandfather and father were charter members of the Greenfield Kiwanis Club.  Dick Pasco served in all the offices of the local club except that of Treasurer.   He was President of the local club twice.  In addition to the local Kiwanis, Dick served as Lt. Governor of the Rose Division and Governor of the Indiana District of Kiwanis.  Before becoming mayor, Dick served as a member of the Greenfield City Council for twenty years and served as a member of the Hancock County Council.

The largest city project in terms of financial cost and complexity is the Potts Ditch project.  The project is estimated to cost about $10 million.  The mayor is in hopes that the project will come in at less than that amount.  He noted that the project needs to be done now because of the deteriorating tunnel system.  This is an excellent time to do this project with bonds as the interest rates are at historic lows.  In addition other revenue will be used so that the project will not require the entire amount to be bonded.

The next priority for the city is street repair.   The mayor stated that state distributions will increase next year allowing more repair to be completed.  The mayor said traffic studies would be conducted to determine high traffic areas that should be priority.

The Downtown revitalization project is the third large project.  Consultants were hired and developed a master plan to aid in obtaining grant money for the revitalization.  The mayor hopes that apartments would entice new people to live downtown by the Pennsy Trail and then become a part of the community before they purchase a home. 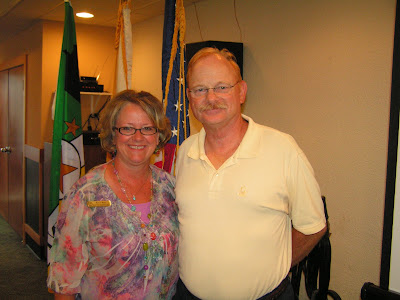 
County Clerk, Marcia Moore discussed the merits of using a Voting Center system over the traditional precinct voting.  The system has been proposed for implementation in the 2014 Primary election.

Since Moore was elected Clerk the number of voters and precincts has increased.  The number of precincts increased from 38 to an expected 59 for next years election.  Using the traditional method of voting each precinct would have a set of election day poll workers and a unique or shared polling place.  Using the voting center system only 12 election sites will be in operation in the county.

This provides for potential savings :
23% of the county voters cast their ballot in early voting in the most recent election.  Multiple locations will be available to cast their votes prior to election rather than only the courthouse.
For more information see  http://www.hancockcoingov.org/  , click clerk, then click elections, then click voting centers.

Posted by Greenfield Kiwanis at 5:21 PM No comments: 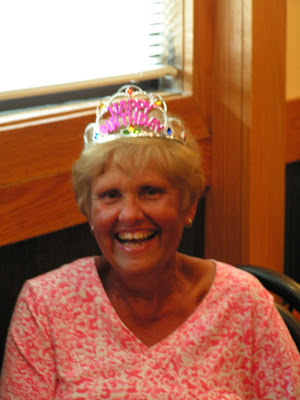 
Posted by Greenfield Kiwanis at 5:06 PM No comments: 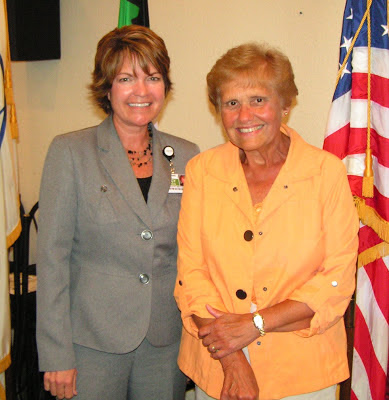 Nancy Davis, Executive Director of the Hancock Regional Hospital Foundation spoke to Kiwanis about the foundation and its current activities.  The hospital foundation partners with the hospital to provide services to the community.
The current campaign to provide an endowed fund to help bridge insurance and government reimbursement and actual cost of hospice care has raised $1.8 million towards a goal of $3.0 million.  Reimbursement averages only 30% of the costs of hospice care.  Currently the hospital has a separate 7 room facility for care that provides patients with respite, palliative, hospice or pain management care.  Since the facility opened in September 2011 it has served over 300 patients.
Some of the most public activities of the foundation are the annual golf tournament and the Women Helping Women dinner.  The golf tournament provides funds for nursing scholarships.  Women Helping Women hosts an annual fund raising dinner to fund mammograms, breast health education and MRI’s for uninsured or under insured women.  The dinner this year will take place at St. Michael’s Parish Life Center on October 23, featuring comedienne Diana Jordan.
For more information use http://www.hancockregionalhospital.org/foundation or contact Ms. Davis at 317.468.4583.
Posted by Greenfield Kiwanis at 5:08 PM No comments: