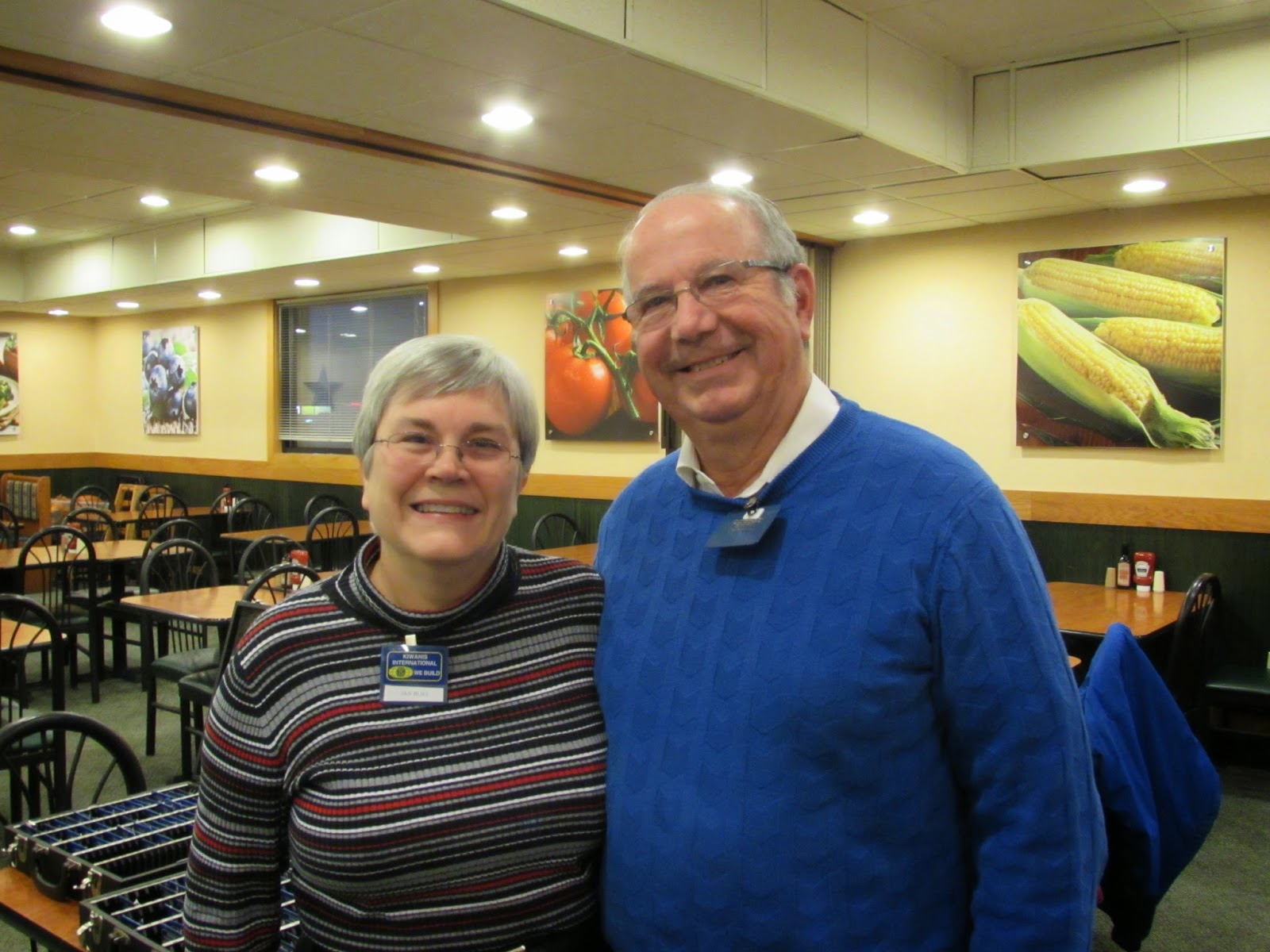 Steve and Jan Burt were the “Meet Your Kiwanians” for November.  They’ve lived in Greenfield for 39 years.  Before that Steve was born and grew up near Muncie later graduating from Ball State University.  Jan was born in Indiana but her physician father was drafted into the service where she attended 12 different schools over 12 years before returning to Indiana to attend and graduate from Ball State University.   Steve and Jan met at Ball State and were married in 1972.

The Burt’s moved to Greenfield in 1975 where Steve was Principal at Riley Elementary.  In 1979 he became Principal at Weston where he retired this year after 35 years.  Jan has been a Librarian and involved with a pre-school when she wasn’t raising their two sons.  She noted that one of the children identified her as a “cheerleader for books”.  One of their son’s resides in Noblesville and the other in San Antonio, Texas.  They have one grandson.
Posted by Greenfield Kiwanis at 11:54 AM No comments:

Greenfield Kiwanis members donated a total of $665 for the purchase of Christmas hams.  The Hancock County Food Pantry welcomes donations of money because each dollar donated has the buying power of $5 – $7 due to the sourcing of the food available to them.


Bryan Marr, a Firefighter/EMT who is with the Greenfield Fire Department spoke to Kiwanis about Hazardous Material Response.  He received certifications in Fire Service, Technicians, and Industrial Response in 2007.   Hazardous Materials are substances that may cause significant damage to people, property and the environment.
Millions of tons of hazardous materials move through or are stored in our community.  Greenfield relies on the Indianapolis Fire Department for technical response despite several major industrial sites, multiple transportation corridors and the presence of clandestine labs to produce drugs.
The Greenfield Fire Territory Hazmat Team 2013/2014 Initiative increased training and certification, conducted monthly training in multiple scenarios, instituted a county Hazmat exercise, joined trade and support organizations, and acquired equipment.  Their mission is to provide technical level hazardous response to Greenfield and the surrounding areas with professional expertise, safety and outstanding customer service.
A local hazardous materials team increases community safety, decreases business interruptions, lowers insurance costs, reduces environmental risk, and helps new business growth.  The only disadvantage is the startup and materials cost which may be reduced by grants and corporate or individual donations.  Corporations and individuals can support the program through donating equipment and funds.
The goal is to have the hazmat team go live in the 1st Quarter of 2015.   For further information contact bmarr@greenfieldin.org .
Posted by Greenfield Kiwanis at 5:44 PM No comments: 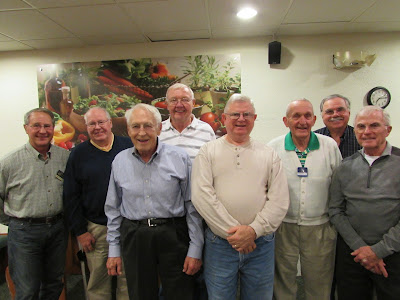 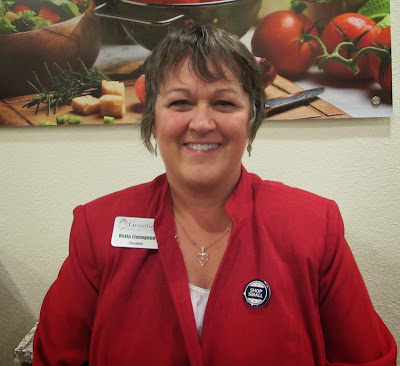 Retta Livengood, President of the Greenfield Chamber of Commerce spoke to Kiwanis and it’s role in the community.  Livengood, a lifelong resident of Hancock County also serves on the boards of Greenfield-Central Schools, Greenfield Main Street, and LINK (Leaders in Navigating Knowledge.  Livengood began her work with the Chamber 6 years ago.
The mission statement of the Chamber is “Partnering for Prosperity”.  They fulfill this mission by connecting people who have products and services available with those who need those products and services.  The chamber has 372 members firms that represent 9,300 people who work for those businesses and organizations.
The Chamber is located at One Courthouse Plaza in a building that was erected in 1875 as a physician’s home and office.  It then served for decades as a local funeral parlor.  The Greenfield School Corporation’s administrative offices were located there when the Chamber took over the building.
The building includes meeting rooms, Chamber offices, and business offices.  The Chamber publishes a weekly newsletter that is e-mailed to over 1000 addresses.  For more information on the Chamber go to http://www.greenfieldcc.org/ or contact Livengod at  (317)477-4188.
Posted by Greenfield Kiwanis at 7:10 AM No comments: 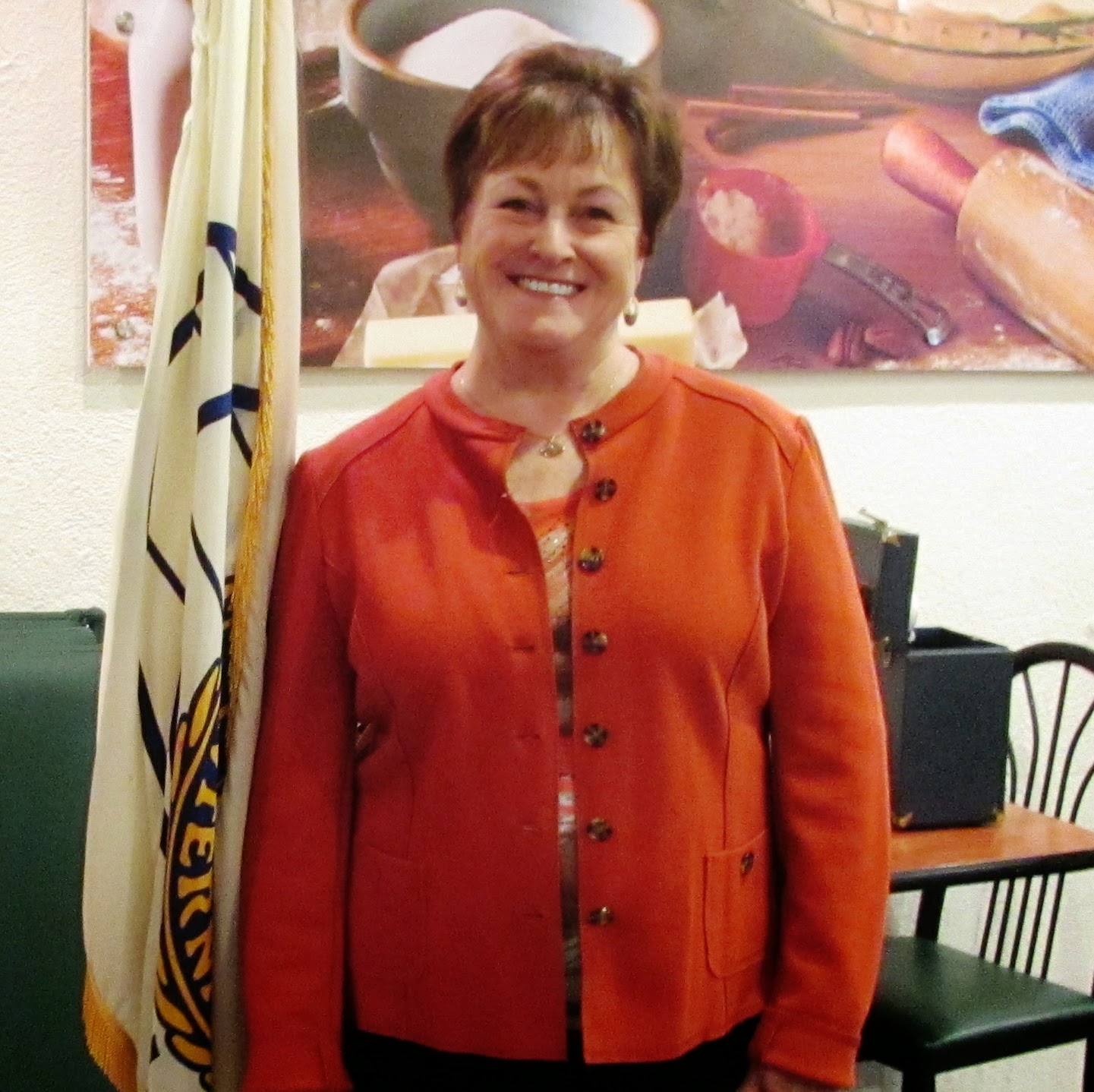 Chris Thompson, a Biosafety Consultant who travels worldwide, consulting and teaching classes in biosafety spoke to Kiwanis regarding the Ebola scare.  Chris Thompson is Past-President of the American Biological Safety Association and spent 30 years as a Biosafety officer with Eli Lilly and Company.  She is currently a Biosafety Consultant with WCG Biosafety and owner of Thompson Biosafety.  She and her husband Lyman are members of the Greenfield Kiwanis cub.
Ebola is one of several “What’s going to Kill Us All?” scares including HIV in the 1980’s, Y2K in 2000, Swine Flu in 2009, and North Korea in 2013.  Ebola is a virus believed to have spread to humans from wild animals with the first recorded outbreak in Africa in 1976.  Numerous outbreaks in Africa have occurred since.   The 2014 outbreak began in western Africa in March.
Ebola is spread only by direct contact with body fluids of a person who has symptoms.  Direct contact means through broken skin, mucous membranes of the eyes, nose or mouth.  Bodily fluids include, vomit, feces, blood and saliva.
Ebola is NOT spread through the air, water, food or by mosquitoes or other insects.
The epidemic(s) in Africa occur because of the lack of infrastructure (e.g., sewers, clean water, and sanitation), lack of hospitals, quality of medical care, lack of healthcare workers and training, lack of protective equipment and cultural issues.
Chris suggested that we need to be more concerned about influenza, measles, influenza, whooping cough, influenza, and those diseases for which we have vaccines and those who refuse to vaccinate themselves or their children.  Her advice is to get vaccinated and wear your seatbelts.
Posted by Greenfield Kiwanis at 9:09 AM No comments: