The Kiwanis Club got to know two of its newest members at the meeting on Tuesday as Jan and Reed Tarwater spoke to the members about their background and interests.  Both are natives of Tennessee who met at Maryville College.   Jan graduated with a degree majoring in mathematics and mathematics education.  Reed graduated with a degree in chemistry.  After college they married and moved to West Lafayette where Reed studied medicinal chemistry at Purdue, receiving a PhD.  Jan completed a Masters in Mathematics.   Jan also taught in the Monticello school system while at Purdue.

Upon completion of their Purdue education they moved to Chicago, then to Birmingham Alabama, and then finally to Hancock County where Reed worked for Eli Lilly and Co.  He retired from Lilly and was a consultant to another company for 8 years.  Jan taught Mathematics at IUPUI and the University of Indianapolis.

They have been active members of Bradley United Methodist since moving to Greenfield.  They are avid travelers having logged trips to all 50 states, most of the provinces of Canada, much of Europe, Kenya, Australia, New Zealand, and Japan.  They are also avid antique car enthusiasts. 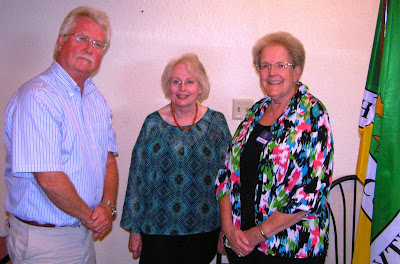 Tom Strickland, Rosalie Richardson and Gwen Betor presented a program called Greenfield Landmarks, In Plain Sight to the Kiwanis club.  Gwen Betor is a board member of the Riley Old Home Society and hostess at the Riley Museum and Riley Home.  Rosalie Richardson and Tom Strickland are board members of the Greenfield Historical Landmarks.
The first home shown was the remnants of the Dunbar Hotel.  The Dunbar Hotel originally stood where the Randall building now stands.  The Hotel was divided in half and the remaining portion is now a residence.  The Hotel was originally built in 1869.
The Randall Home, the Tom Black Home were shown.  Gwen Betor spoke about the 2nd home of Will Vawter, the artist who illustrated many of James Whitcomb Riley’s poetry books.  The Morehead home and the homes Ephraim Marsh were shown.
The current home of the Hancock County Prosecutor’s office was displayed.  Originally this served as the county jail and residence of the sheriff.  The First Christian Church was next to the jail at that time and later was moved to its current location.  During the summer when both the jail and the church had open windows it was said that the inmates would heckle the preacher.  The site of the church is now the parking lot.
Two homes on West 5th Street were described.  One is the current home of Phil and Janice McCord and the other the 1856 home of Philander Boyd currently owned by Tom and Joyce Strickland.  The Spencer Home was shown.  Originally the home started as a small house and the current structure was built around that house.
Many of the photos used were from part of a collection of glass negatives taken by Ora Myers, former mayor of Greenfield.
Posted by Greenfield Kiwanis at 5:26 PM No comments: 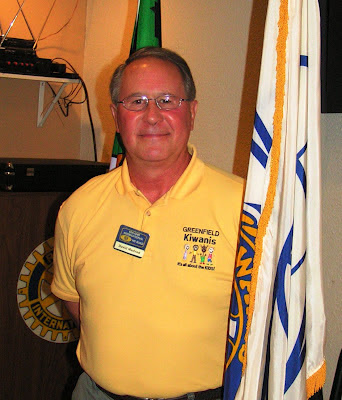 David Medved, a member of Greenfield Kiwanis shared his photographs and experiences from 16 National Parks in the Western United States.  David mentioned that there are 392 national parks, forests, or monuments operated by the National Park Service.


The tour started in South Dakota with the Badlands National Park.  David mentioned that this is part of the plains region of the United States but the formations we see are the results of many years of water and wind erosion.


The next stops were Yellowstone National Park and Grand Teton National Park in Wyoming.  David’s pictures included pictures of the parks water features as well as Grizzly Bears, Bison, Moose, and Elk.


Petroglyph National Monument and Kasha-Katuwe Tent Rocks National Monuments in New Mexico featured Petroglyphs and hoodoos.  Tent rocks are hoodoos that erosion has caused the top of the hoodoo to fall off leaving a rock that resembles a teepee like tent structure.

Posted by Greenfield Kiwanis at 5:43 PM No comments:

The Other White Meat 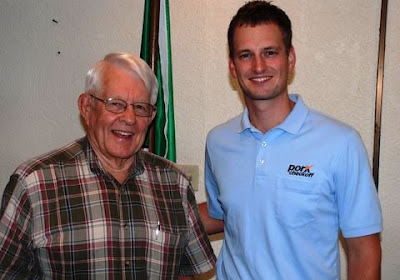 Greenfield Kiwanis welcomed Todd Rodibaugh, Regional manager of the National Pork Board headquartered in Des Moines , Iowa . Due to consumer demand pork today is 75% leaner than in the 1950’s. Pork tenderloins are now as lean as skinless chicken breast and have received the checkmark of the Heart Health Institute. Indiana ranks 5th in United States pork production and in 2011 pork exports were 6.11 Billion dollars. More information can be found at www.pork.org.
Posted by Greenfield Kiwanis at 3:28 PM No comments: